According to the Swanson effect in the graph below, the price of Crystalline silicon or wafer-based solar panel cells is decreasing rapidly and predictably and at present rates, costs reduce by 20% every ten years. Using Swanson’s Law, we see that the cost of solar panels fell from $76.67 per watt in 1977 to $0.36 in 2014.

Even though solar power costs are dropping, determining the best financial strategy can be confusing if you’re new to the topic. Just like every state has its own guidelines and regulations for solar installation, there are different ways to financially obtain your solar power system. 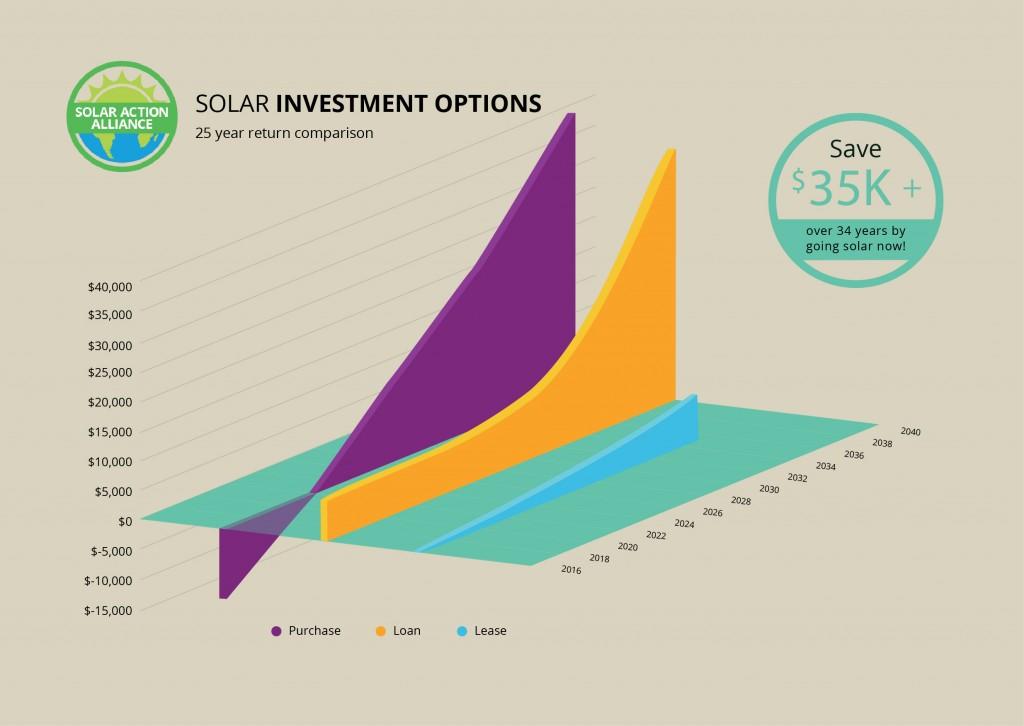 It’s clear from the graph above that investing in solar power in New Jersey can earn you a lot of money. Homeowners in New Jersey who make the leap to solar can receive specific incentives that can equal thousands in your savings account over the coming twenty-year period.

The Solar Renewable Energy Credit is also known as SREC. The Garden State allows you 6 of these credits per year. One megawatt of solar produced electricity is equivalent to one SREC. Purchasing SREC’s produced by your solar panel system gets utility companies closer to state mandates for renewable energy. Pricing fluctuates over a one-year period, but as a homeowner, you earn approximately $170 annually, from selling an SREC. Assuming you get 6 per year, you can put the equivalent of $1,000 in your savings account through 2030.

Up to $1,000 for the next fifteen years, that’s big money to most people. Whether you (1) lease your solar power system, (2) purchase outright with cash, or (3) purchase using a home equity or bank loan, your return on investment (ROI) in solar over a 25-year period is shown in the chart above. 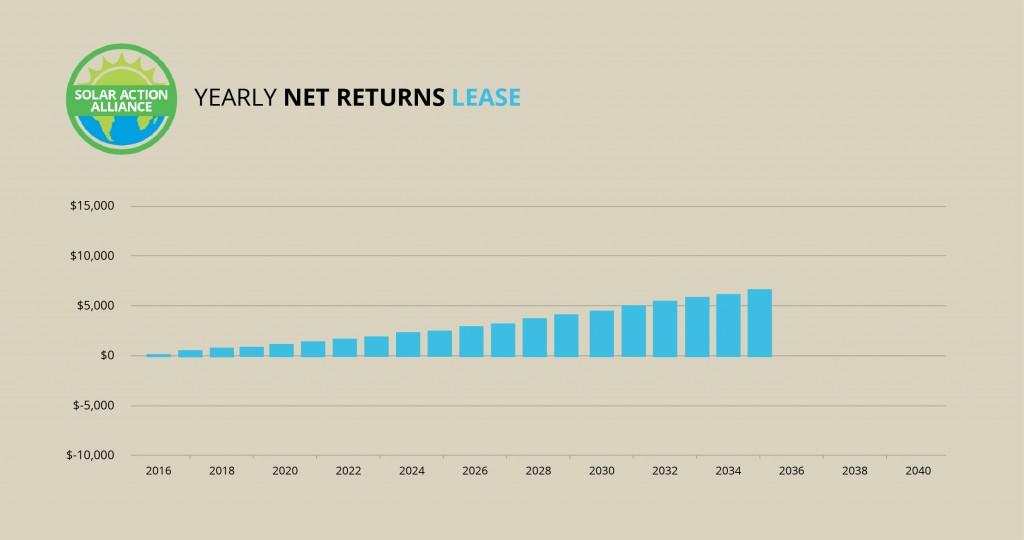 The first option, leasing a solar system, is sometimes referred to as third-party or a (PPA) Power-Purchase Agreement. Solar panels are installed on your roof by a company specializing in solar installation. You don’t purchase any materials and there is no installation charge to you.

You then make monthly payments for electricity use that is approximately $15 less per month than what you were paying your electric company. Leasing a solar system or PPA is a viable alternative for anyone without a lot of cash up front or someone who lacks sufficient home equity. With a lease option, you miss out on those big first year perks from a purchase, but you put no money down up front and still get to save money and help the planet by using cleaner renewable energy. 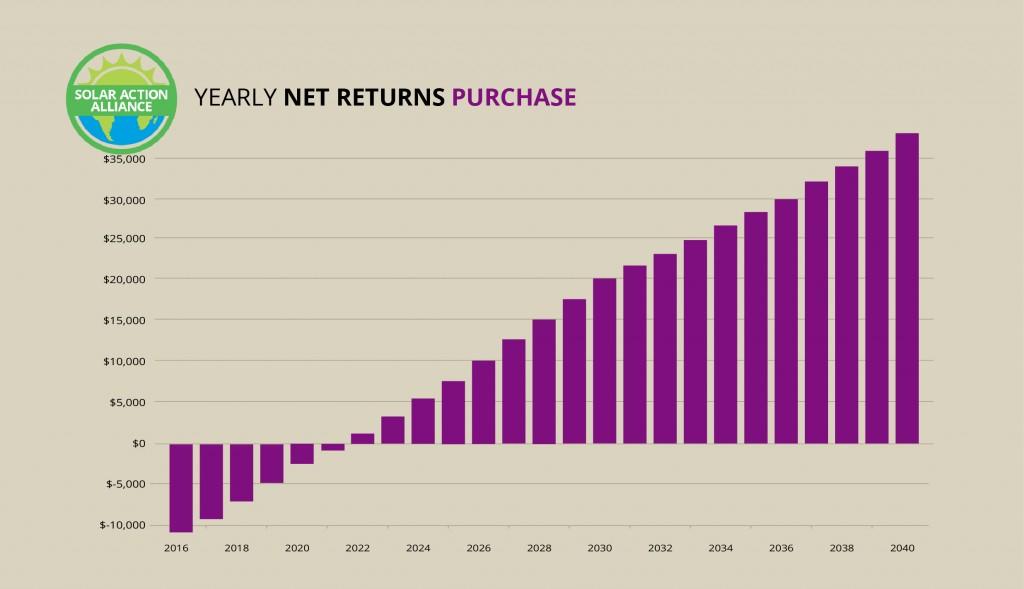 It used to be that the only way to get solar power in your home was to have the cash to just buy and install the whole system outright. Some people still feel this is the way to get the “largest” financial result.

If you’re thinking about purchasing a solar power system in New Jersey, you can expect to have just under a $20,000 initial outlay. Your internal return rate on investment for a solar purchase in the Garden State, though, is approximately 15.6%, making your first year costs around $12,139.

Reduced electric bills, SREC sales, tax credits and rebates, combined with lower solar power costs than in past decades, means a solar power purchase in New Jersey pays for itself within a short time. And while your neighbors pay increased electric utility rates, the savings for you just keep getting bigger year after year

The recent popularity of solar systems means your home value jumps about $18,720. Expected profit from purchasing a solar power system that feeds back into the utility electrical system is about $32,282 from 2021-2039. It does seem from the chart above that purchasing a solar system with cash provides the biggest return in dollars long term but let’s look at our third option. 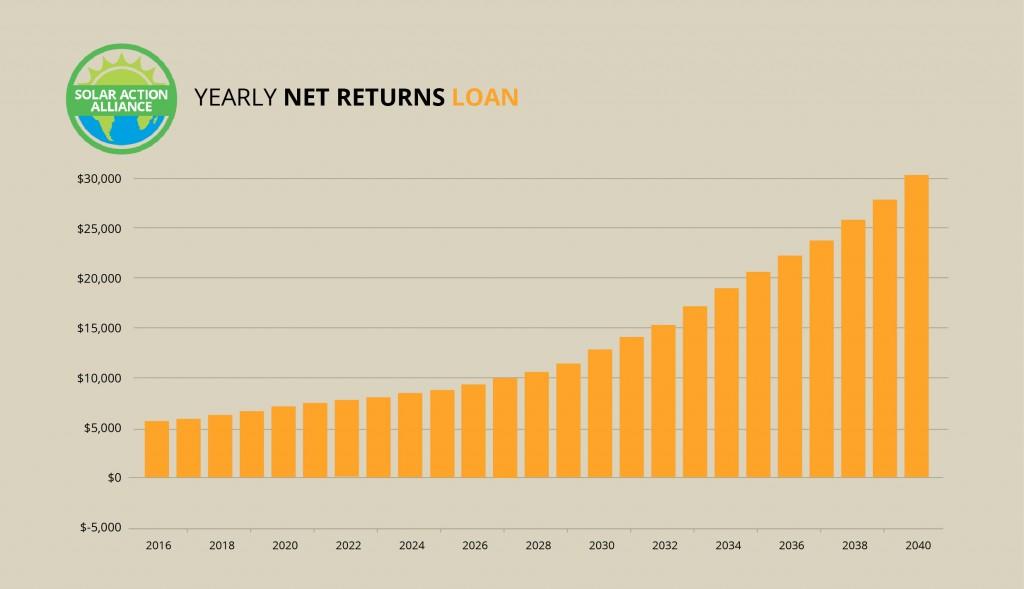 Let’s say you just don’t have $19,000 in the bank, or maybe you do, but just don’t want to wipe out your savings to purchase a solar power system. If you own a home with some equity, the third alternative is taking a Home Equity Line of Credit loan (HELOC) or loan, to purchase the solar system. If you look at these numbers, you will see that purchasing the solar system gradually provides you with a large financial perk in the first year and requires no money out of your pocket over time.

When you take out a solar power system loan, you still qualify for all the perks as if you’d paid cash outright. The first year you put thousands back in your pocket and then enjoy an excellent profit over the next 25 years. Figure in a tax credit of up to 30% in the Garden State, plus SREC sales, and energy savings. In the first year, these all equal money earned for you. Yes, with a solar loan, you gain a monthly payment for 15 years, but that expense is offset, when you factor in not only your electricity savings but also the money from SREC sales. The end result is more or less free money without the big financial costs up front.

If you like no risk money making and you can qualify for a HELOC or loan in the amount of $18,750 at a 5% or less fixed interest rate over a 15-year period, then a solar power purchase is right for you. Even if you can only qualify for a loan at a slightly higher rate, don’t be discouraged, you’ll earn a bit less but you will still save thousands.

New Jersey rates 16th in the country for its Renewable Portfolio Standard (RPS). If you aren’t familiar with the term, it refers to the way every state mandates energy generation. Every state determines that a certain percentage of the total energy produced in the State must come from renewable energy sources by a specific date. If mandates aren’t met, utility companies must pay steep fees.

New Jersey has a very strong RPS or mandate that 22.5% by 2021. Utility companies have two ways to meet that goal. They can produce energy through renewable resources themselves or they can buy it, from consumers like you.

When you get less of your power from utility companies, it actually costs them money. Paying you high amounts for solar power that you feed back into the grid isn’t high on their list of fun things to do either. So the only incentive for utility companies, to help you transition to solar panel energy, is to avoid the even higher fees to the state if they don’t meet those RPS state mandates.

You may also have noticed that states that appear to have the most natural resource for solar available, like Florida, don’t do as well when it comes to solar power as other states with less resources like Connecticut or New York. Florida has more sun so this seems weird, right?

This is because it is under the authority of public utilities commissions and legislatures in each State to determine and enforce regulations that let residents access solar power. Solar power use is impacted by how favorable the rules for solar power are for residents. New Jersey does well in this area and solar power use is very prevalent in the state. 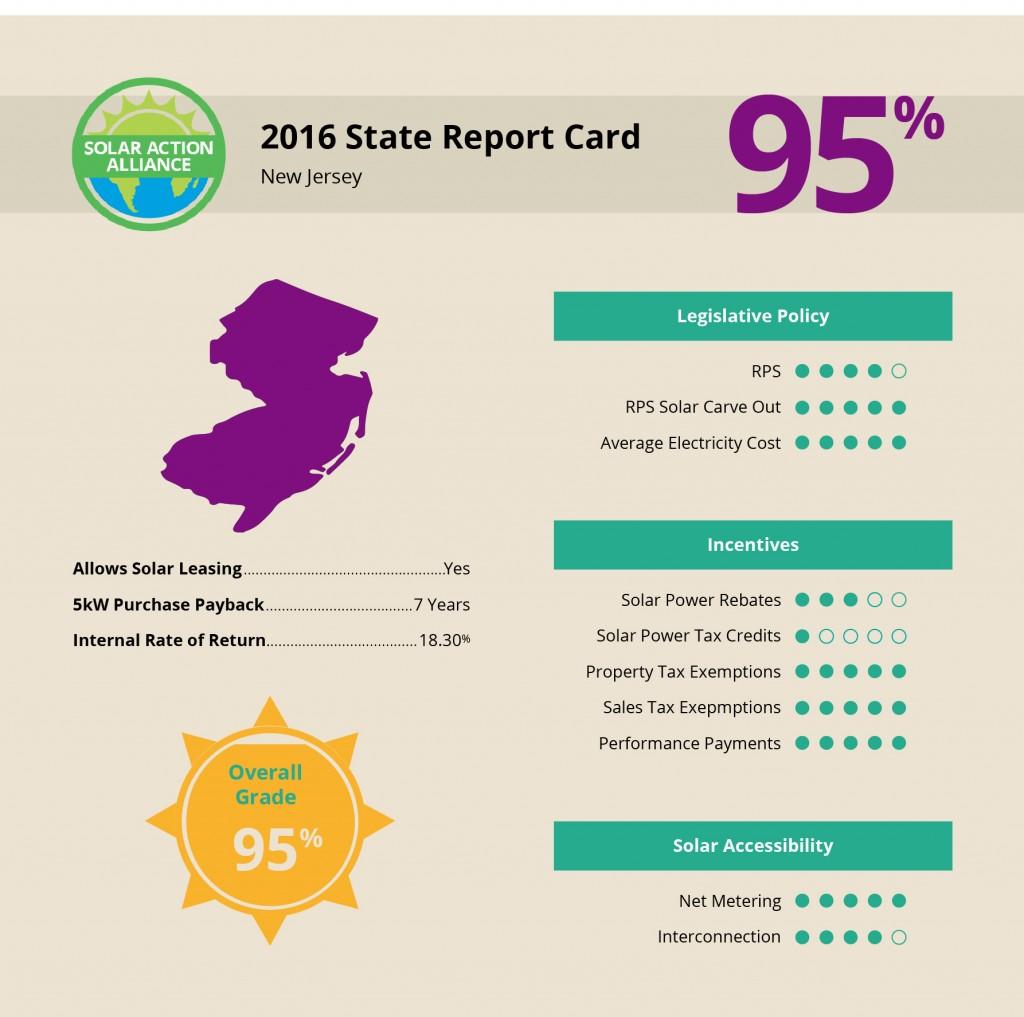 New Jersey has made significant achievements in solar power that other states could learn from. In fact, i’s in a three-way tie for first place out of all 50 states in the country.

The Environment America Research & Policy Center has recognized New Jersey in recent years, as the 5th top state in the country, for the work they do to get the word out about solar power. As a result, solar power in New Jersey overall is very accepted by residents as an option for electricity.

The Solar Report Card grades every state in ten areas and gives not only a grade for each category but also an Overall Grade for the state. New Jersey receives A grades in all but 4 categories. RPS Law and Interconnection get B’s. With a C in the Rebates category and an F for tax credits, New Jersey’s overall grade is still an A for solar power.

So, if you are a resident of New Jersey or planning to be one in the near future, it’s one of the three best states in the country for solar power. IRR is 18.3% and payback time for a standard 5-kW solar power system is a short 7 years which makes it a great renewable energy alternative for your power needs.