Intro to Solar Power in California

California has an impressive record regarding environmental policy—from groundbreaking regulations for car emission regulations to one of the nation’s first organic food laws. So it’s not surprising that its state policy also provides lots of support for solar panels in California. CA is also among the states most vulnerable to climate change, as major droughts fuel fierce wildfires and threaten the region’s important agricultural industry. It all adds up to excellent reasons to go solar, including lowering your carbon footprint and your electric bill.

As more and more photovoltaic systems have been produced, the cost of solar has dropped dramatically in recent decades; this is called the Swanson Effect. As the graph below shows, the cost is now extremely low. (And it’s still dropping!) So it’s easy to see how can accumulate huge savings by going solar now. If you are interested in solar panels in Sacramento, click on that highlighted text.

In California, as in most states, you have a couple of different options for getting your own solar power system: you can buy your system outright; you can purchase equipment using a home equity line of credit (HELOC); or you can lease equipment through a power-purchase agreement.

As the following graph illustrates, purchasing gives you the best return on your investment for solar panels California. If you can afford the initial cost, the system will save enough money to pay for itself, and will thereafter turn a profit. (In California, energy companies are required to buy all of the power that you produce but do not use.)

Purchasing Your Solar Panels with Cash in California

This graph shows how a $17,500 solar panel system can pay for itself in less than ten years. (The first-year cost is smaller than that because the figure does not include the money the system saves the first year, nor does it include the substantial available rebates or the federal tax credit.) In this example, annual savings are well over $1,000. 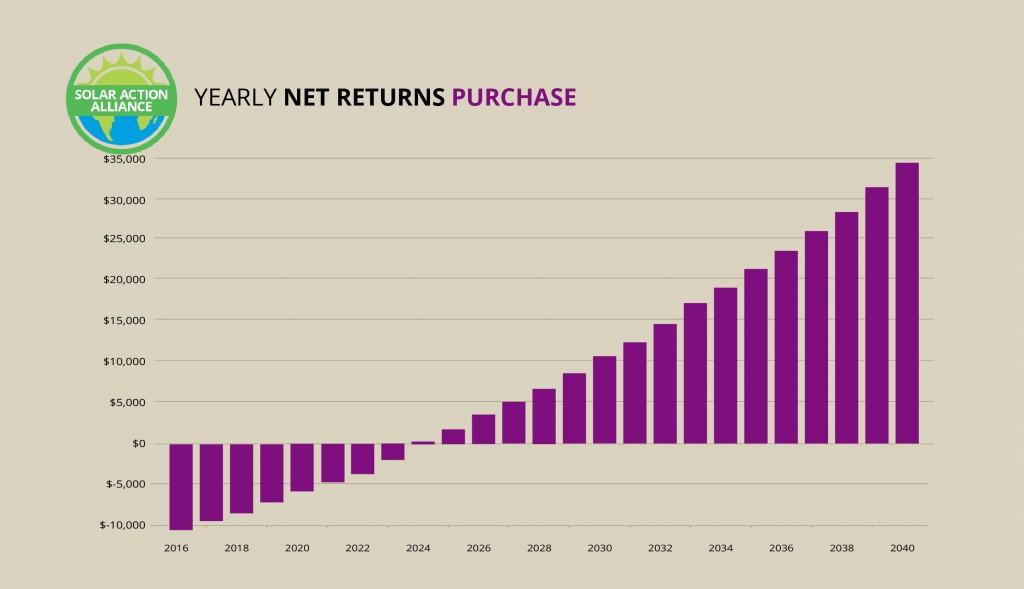 Over the 25-year life of the system, you could save (or generate!) close to $35,000 after the equipment pays for itself. And that’s not counting the huge boost to your home’s value, an increase which the State of California does not tax. 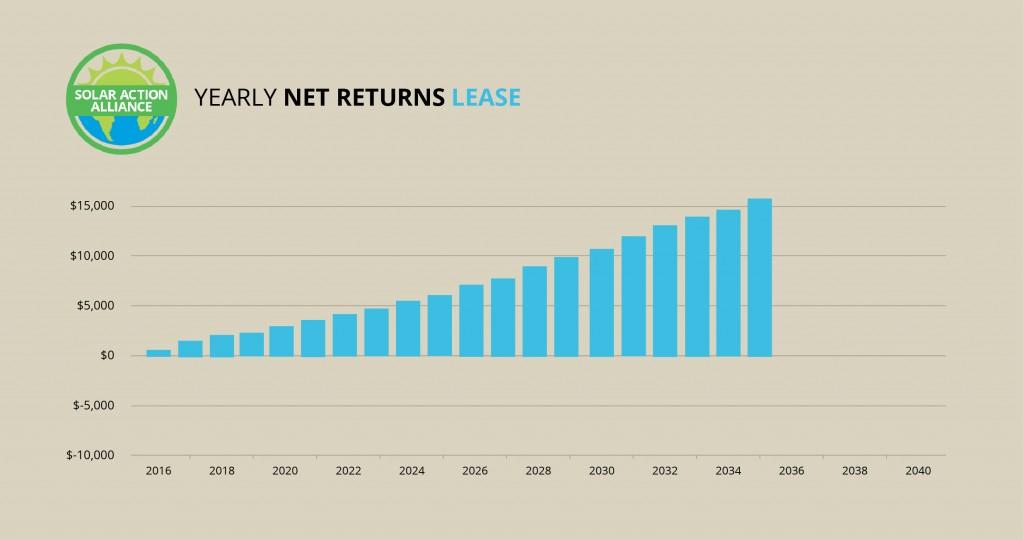 As you can see, the savings add up much more slowly with a leased solar panel system. But since you do not have to pay any money upfront, you can start to see an improvement in your finances right away. You do owe monthly lease payments, but your payments plus your new electricity bill are still smaller (sometimes much smaller) than your old bill.
The important thing to remember is that you don’t own the solar panels; that means that you don’t get rebates, tax credits, or payments for power generation above what you use. But you don’t get any repair bills either. Your solar provider takes all the risk, then shares part of the return with you. 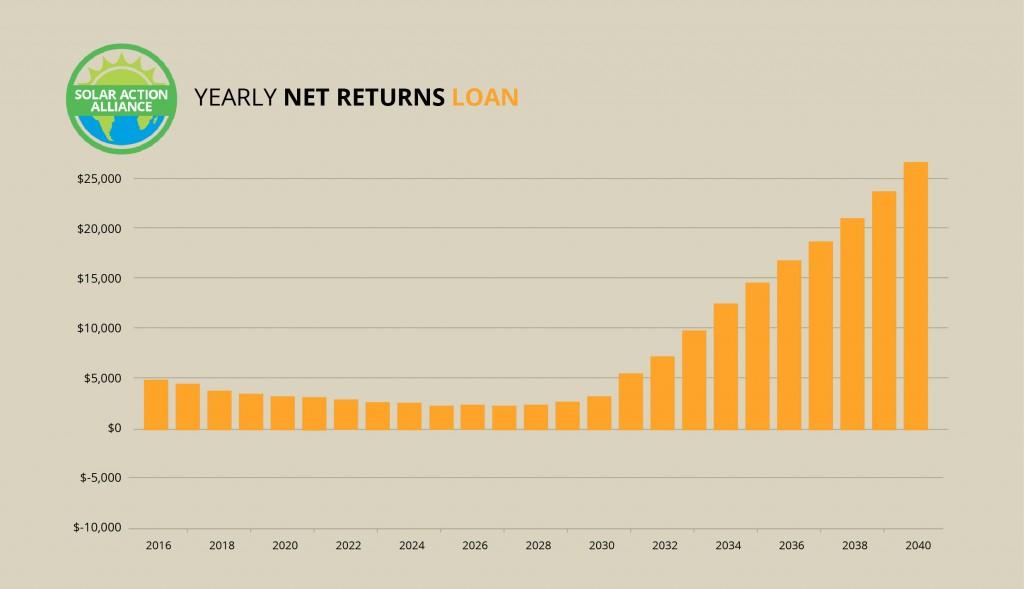 Taking out a loan to buy solar is a great option, provided you qualify for a home-equity loan of the right size, as well as  a fixed-interest rate of 5% or lower and a 15-year repayment period. There’s no cost upfront, and while monthly payments are higher than those for a lease (as is overall risk), you do own the system. Therefore, you receive all of the credits, payments, and other benefits of ownership. And for the last decade of the system’s expected life, you’ll have no payments at all, only savings.

An Renewables Portfolio Standard (RPS) is how much of a state’s energy must be generated from clean renewables by a certain date. California’s goal is 33% by 2020, with an interim goal of 25% by the end of 2016. Electric companies that don’t meet these standards will have to pay hefty fines. 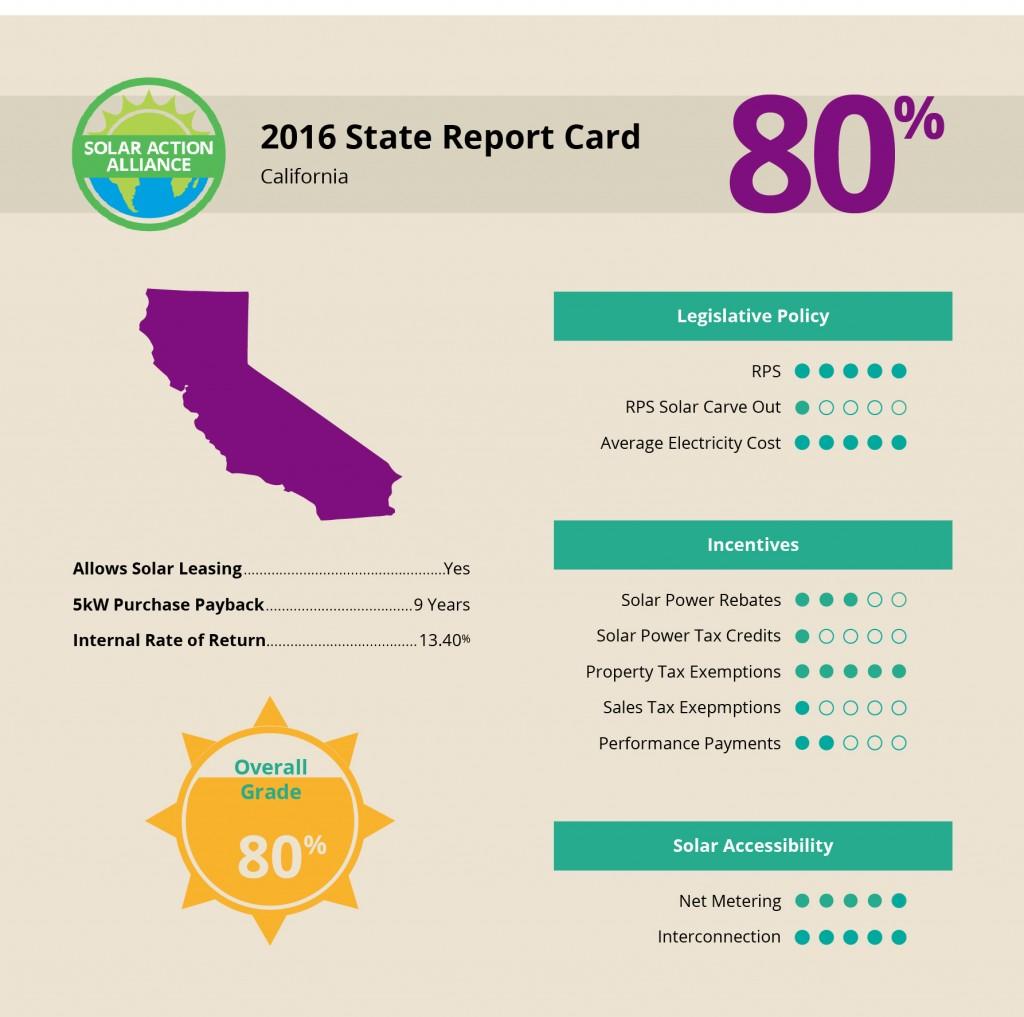 Overall, California gets a solid A rating for solar panel usage, largely because of its strong RPS and its property tax exemption for the higher value of a house with solar. The state’s net-metering and interconnectedness policies make it easy to get paid for all the surplus electricity you generate, too. And California has the 9th-highest electricity rates in the country, which means the savings from switching to solar panels are substantial.
The state used to do even better, earning an A+ rating, but it dropped its tax credit for solar. (You get a higher federal tax credit to compensate.) California has no solar carve-out, either, which means that energy companies have less incentive to encourage solar than they might. And the larger energy companies have already run out of funding for rebates on solar panels.
There is no statewide Feed-in Tariff (FIT) program, though some local areas have their own. FIT is an alternative to net metering as a way to get paid for surplus electricity generation. Therefore, California could, and should, do better at encouraging solar than it does, but it still scores well in the most important areas.

The bottom line is that how much you save depends on how much electricity you use, as well as how the electric market changes over time. But solar power in California is still a very good bet—for yourself and for the climate.