The Mountain State sits just below the Mason-Dixon line, making it one of the northernmost of what is considered the southern United States. Its climate is described as humid subtropical, which is a temperate mixture of hot, humid summers and mild winters. According to West Virginia’s state commerce site (www.wvcommerce.org), the state is capable of producing 4.4 kilowatt hours per square meter per day. This is comparable to its neighboring states, and second only to New York, which produces 4.6.

Unfortunately, the West Virginia state legislature shows little interest in cultivating this sunshine potential. Previous incarnations of West Virginia’s meager Renewable Portfolio Standard (RPS) was repealed by the state government in favor of other bills, and the both the net metering and interconnection policies have seen ineffective revisions.

There is reason to feel positively, however, because the cost of photovoltaic cells has grown exponentially less expensive over the past several decades. This is a trend that is almost certain to continue, according to SunPower Corporation’s Richard Swanson, the cost of solar panel cells will be cut in half every ten years. Observe the graph below, which illustrates this trend over the past 40 years:

Deciding between the options to purchase solar panel power in West Virginia can be challenging, so the following sections will make plain the expected returns on the different methods. All states benefit from a 30% federal tax credit on solar installations that are either bought outright or bought with a supplementary loan, which comes out of the original price. Because West Virginia doesn’t have a viable leasing option, this has been replaced with a small installation. 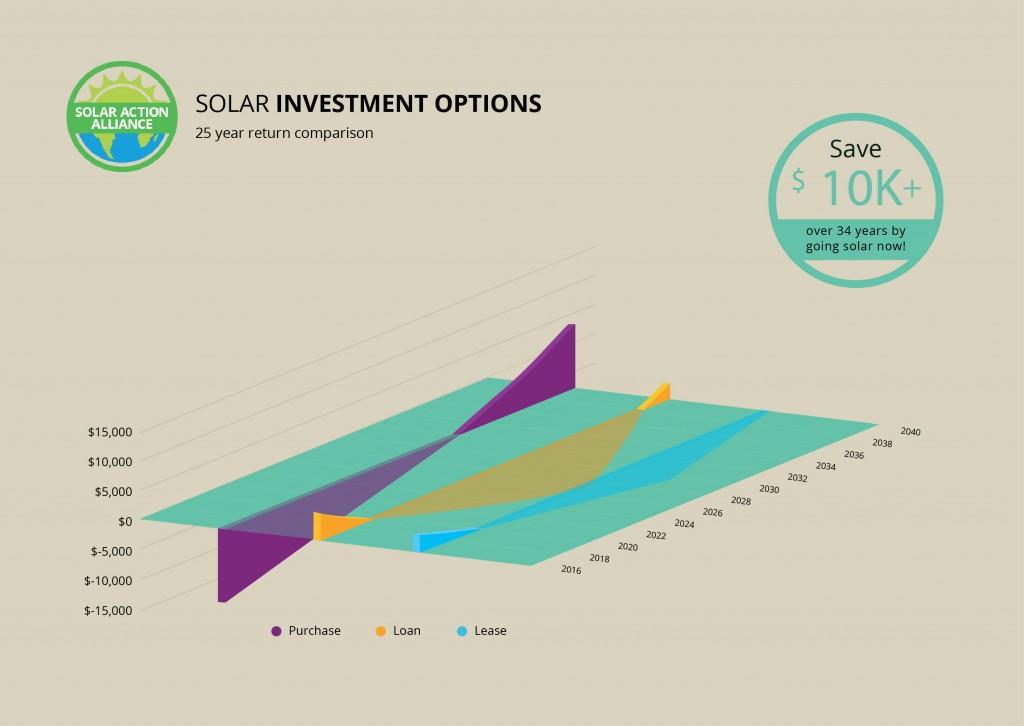 The above graph illustrates the expected returns for the 25-year life of a solar panel installation, considering the costs and returns of buying with a home equity line of credit (HELOC) versus buying large or small installations. The buying option has more upfront risk with the largest returns later in the installation’s life cycle.   A smaller installation carries have the risk and half the reward, but the lower upfront costs may be a more realistic goal out of the three. 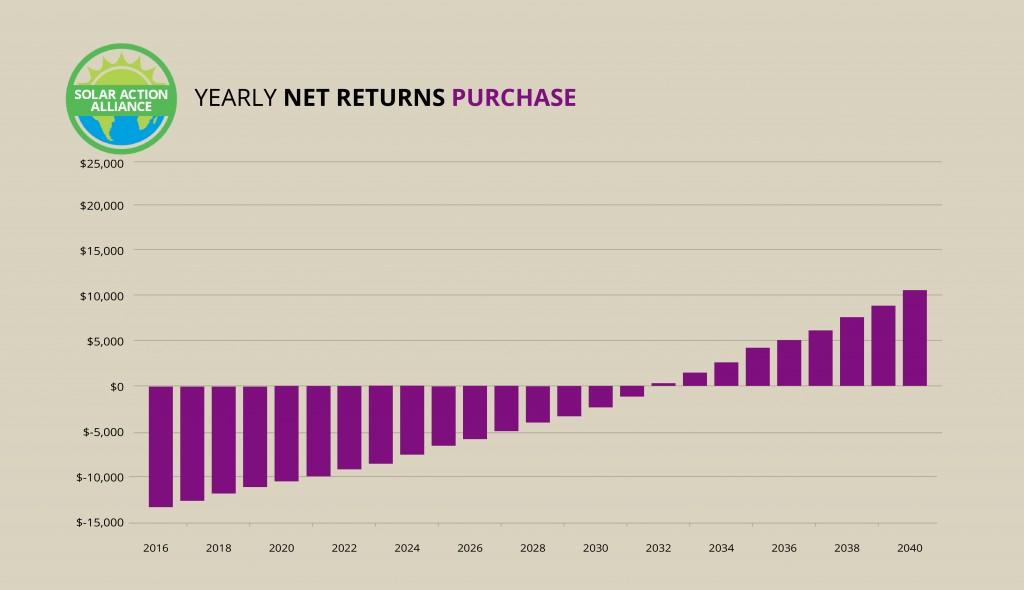 Buying a normal solar panel installation costs slightly more than the norm in West Virginia; a 5-kilowatt system costs about $20,000.   The federal incentive of 30% for this amount comes to about $6,000, so the initial upfront cost is actually about $14,000.

Factor in the first year savings of $625, and the cost is a much more reasonable $13,375.   It would take about 17 years for the system to pay for himself with the rises in electricity increasing the savings every year, so the last 8 years is all part of the return, which can exceed $10,000 in most cases. 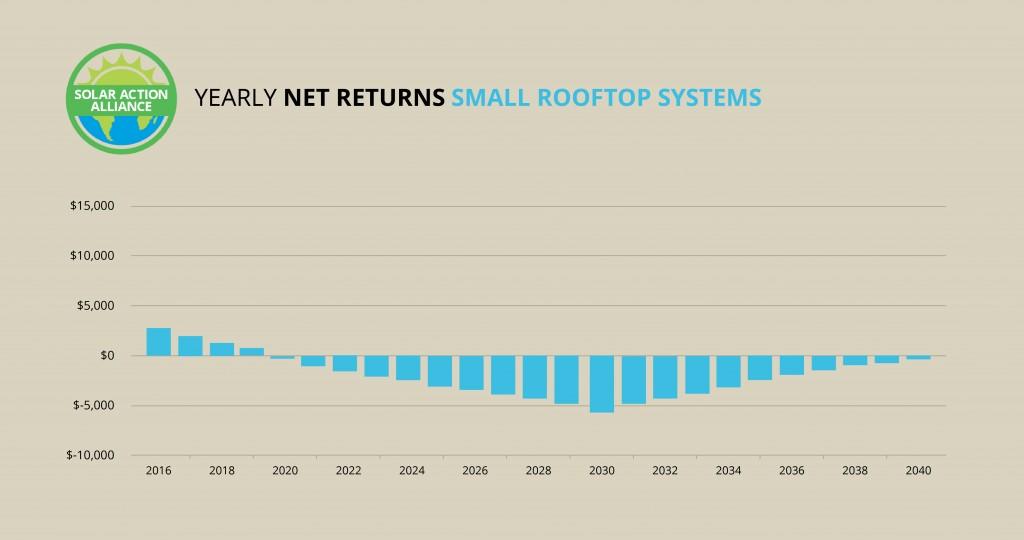 For some, the investment required for the 5-kilowatt system may be a little steep, so a smaller installation may be a more practical. It produces 40% of the power of a normal installation, and it costs 40% less. Using the example above a small install would run $9,000, and the federal rebate would be $2,700. The initial investment minus the $300 you’d save on electric comes to $6,000, a much smaller hit on your savings account. The returns for this install would be smaller proportionately, somewhere around $5,000 over the course the system’s 25-year life span. In the end, you just about doubled your initial investment! 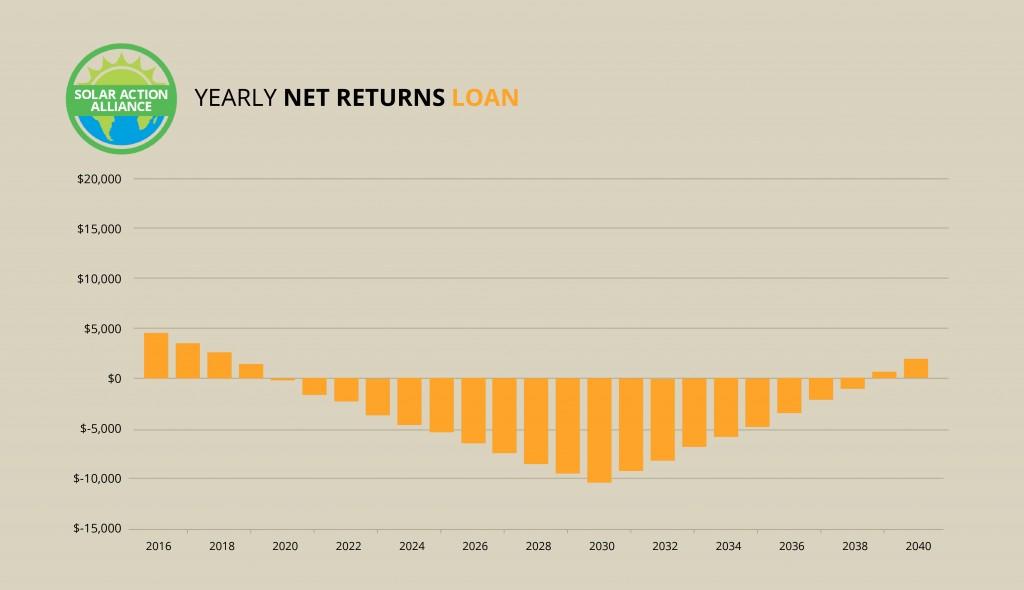 A HELOC loan is a home equity line-of-credit, where your home equity is used as a factor in deciding how much you’d have to put down, similar to a credit score. The HELOC can be applied to the 5-kilowatt system for a loan of $20,000 or a small 2-kilowatt installation for a loan of $9,000.   Interest rates are usually about 5%, so factor that amount onto the total. The good news is that the Federal tax credit of 30% still applies if the system is acquired via loan, and this percentage is taken out of the original amount of the loan.

You’ll have to make loan payments for the first 15 years of ownership, but this would be offset by the money you’ll be saving on electric from solar panels every year. After year 17, give or take a year, the loan is payed off and the returns are similar to that of buying. The returns for a loan purchase are much smaller than that of an outright buy, but the initial down payment of $0 is much more lenient on your wallet.

A Renewable Portfolio Standard (RPS), also known as a Renewable Electricity Standard (RES), is a mandate that regulates a specified increase in the production of energy from renewable sources like solar, wind, and biomass. The purpose is to encourage utility companies to supplement their non-renewable provisions with ones that are better for the planet. The following table illustrates how West Virginia stacks up in terms of RPS:

West Virginia is currently without a Renewable Portfolio Standard. The previous RPS was to have 25% of energy come from renewable sources by 2025, which is a good percentage but too long a window. Unfortunately, the state repealed the RPS in 2015, citing that the act that supported the original was no longer beneficial. The complete rollback of an RPS is an unprecedented event, as states who aren’t enthusiastic about renewable energy usually just make it voluntary or have none at all. 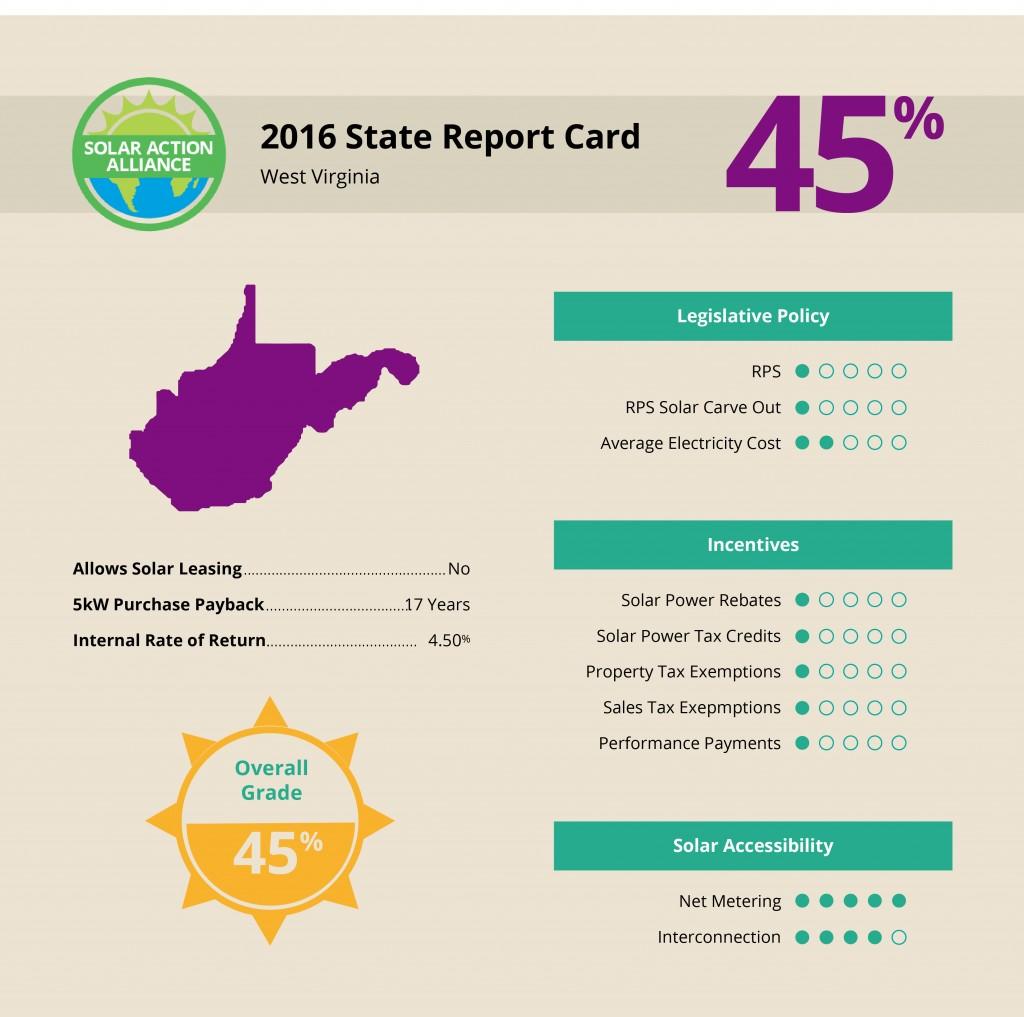 The rollback of the Renewable Portfolio Standard is an indication of the state government’s position on solar energy, or any renewable energy, for that matter. This trickles down to repeals of net metering and interconnection standards that are reportedly in the works. For all intents and purposes, it appears the political engine in West Virginia has taken the rare stance against renewable energy rather than simply being apathetic towards it.

Because of this West Virginia ranks near the very bottom of American states in terms of solar panel readiness. Without a dramatic turn in the position of current office-holders in the state, it is difficult to take an optimistic view on it going forward.