WHAT IS THE IMPACT OF SOLAR POWER ON WATER?

Solar power is without question one of the leading green energy sources as the world moves increasingly away from fossil fuels. Solar has justifiably been greeted as truly sustainable, clean, and increasingly efficient and cost effective. However, even solar energy can’t claim to have 100% environmentally free credentials. One area in which this form of power impacts on the environment is in terms of water.

Solar panel production and the impact on water

However, according to the Union of Concerned Scientists, while solar uses less water, the chemicals used in the manufacturing process are caustic and toxic. There is always the risk of some kind of spill which could result in these chemicals leeching into the soil and contaminating ground water. To be fair, that is a risk that is not unique to solar panel manufacturers.

The effect of domestic or small-scale solar power usage

Photovoltaic solar power such as the panels installed on the roof of a home use no water at all in order to generate electricity. The only water that is used at all is if the panels themselves need to be washed so that their efficiency is improved. That’s it!

The implications for water resources of solar and solar-thermal plants 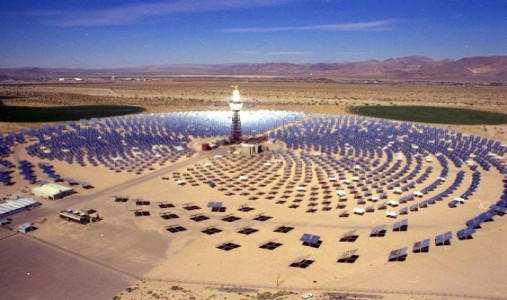 It is in terms of large solar power facilities that the impact on water becomes more significant and of greater concern in terms of the green credentials of solar. The Solar Energy Development Programmatic IES points out several important areas of concern when it comes to these plants:

To offset this less rosy view, one does well to remember that photovoltaic power plants consume only one hundredth of the volume of water used by fossil fuel plants for day-to-day operations! In addition, there are potential solutions for the problems.

As is so often the case, there are broadly two options when it comes to reducing the impact solar has on water: improve or modify existing technologies or develop new ones. In terms of solar power plants there are developments in both areas.

For the large plants there is a growing move towards more efficient wet or water cooling systems and technology. In addition, research and development is underway in terms of dry cooling and also wet-recirculating systems and cooling towers. While these reduce water consumption dramatically, the down sides are a loss of efficiency in terms of megawatt per hour production and increased production costs.

The unknown: the impact of the disposal of damaged or decommissioned panels

There is no disagreement that many photovoltaic cells, especially thin-film cells, contain a cocktail of hazardous chemicals. While the cell is healthy and in use it poses no risk at all. However, solar power is still in its infancy and the cells and panels that were made and sold in the 1970’s are still in use. What will happen when cells are damaged and old? How will they be recycled or disposed of? These concerns are also expressed by The Solar Action Alliance.

In order to prevent these chemicals getting into the water, soil, and air, we need to come up with suitable and safe disposal mechanisms. There is fortunately an added incentive for producers to look into this, though: several of the materials in cells are rare or valuable so they need to be recovered. This should encourage the investigation of recycling and safe disposal.